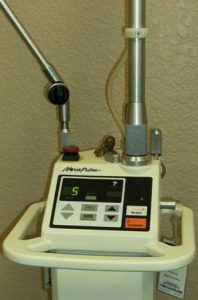 A laser is an intense beam of light, which is focused to be precisely controlled and replaces the traditional scalpel blade. The laser energy instantly vaporizes the water found inside the tissues, allowing it to “cut” or essentually removes an extremely small area of tissue. The energy seals nerve endings and blood vessels as it moves through the tissue, resulting in less bleeding, less swelling and virtually no trauma to the surrounding tissue.

Less Pain– The laser seals nerve endings as it moves through the tissue. Your pet will feel less pain after surgery with the usage of a surgical laser.

Less Bleeding– The laser seals small blood vessels during surgery, resulting in less bleeding and quicker procedures. This results in less anestesia time for you pet.

Extreme Precision– The laser enables the veterinary surgeon to only affect or remove the target tissue, leaving the healthy surrounding tissue untouched.

Reduced Risk of Infection– The high heat of the laser energy kills bacteria and microorganisms as it moves through diseased areas, reducing the chance of infection. Also, due to the fact that only light touches the patient and not a scalpel there is less chance of contamination.

Quicker Recovery– For all the above reasons, your pet will feel less pain, experience less discomfort and return to normal activities sooner with the usage of a surgical laser.

Veterinary medicine began introducing lasers for use in the 1980’s

Accessibility by WAH
Call Us Text Us